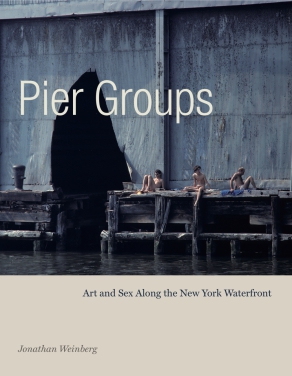 This was one of those books, for me, that pierced a bubble–that helped me become aware of and learn about an entire cultural movement and community that happened during my lifetime, in a place I thought I knew. Visiting New York as a child in the 1970s and 80s, I would never have been taken anywhere near the abandoned piers on the waterfront. They would have been a suburban parent’s archetype of unsafe—and indeed they were, in myriad ways. But they were also, paradoxically, a place of safety for gay men in New York; a place where they could openly express their sexuality and find comfort and pleasure in a way that they could nowhere else. They used the piers for sex, certainly–and rather than shy away from this fact, Weinberg’s book openly celebrates it–but they also used it for art.

Art produced on the piers has somehow simultaneously flown under the radar and also been lauded as some of the defining works of their generation: Gordon Matta-Clark, David Wojnarowicz, Keith Haring. Weinberg’s book, which I had the honor of proofreading, melds memoir with history with art-historical analysis to connect those dots back together again, and to argue, persuasively, that if New York continued to be a cultural capital in these late-century years, it wasn’t just about what was happening in SoHo’s blue-chip galleries but also about what was happening on the waterfront.