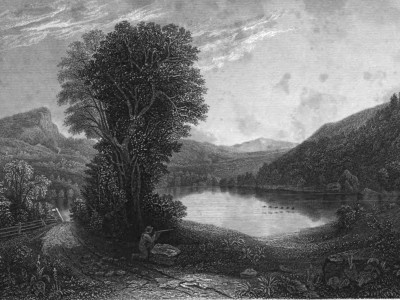 With apologies to all for being just a journeyman art historian and not a Whitman scholar, like everyone else who will be speaking at this event–I am nevertheless pleased to announce that I’ll be presenting a paper at the culminating event of International Walt Whitman Week at the Grolier Club in New York on June 1.

For a while now, I have been interested in the now mostly forgotten landscape painter Jesse Talbot, who is important to Whitman scholars because he was a close friend of the Good Gray Poet, and because his name appears in a notebook in which Whitman first jotted down the ideas that became Leaves of Grass.

With some guidance and feedback from real Whitman scholars like Wendy Katz and Jason Stacy, I put together a proposal for this truly international event—my fellow speakers are from Japan, Israel, Serbia, Germany, Austria, and all across the US—and was astonished and humbled to have it accepted.

International Walt Whitman Week is coorganized by Karen Karbiener at New York University under the aegis of the Walt Whitman Initiative and the Transatlantic Walt Whitman Association. Its twelfth annual occurrence coincides with the 200th anniversary of the bard’s birth in what is now South Huntington, New York, so this year all activities are taking place in New York City and the outlying areas. It’s a full week of Whitman events and activities, offered free to the public: check out the calendar of events for more detail. And if you will be in New York on June 1, please come and be my cheering section at the Grolier Club!

If you are curious to know what, more specifically, I’ll be talking about, here is my abstract:

Despite the Talbot Wilson notebook’s central importance to Whitman scholarship, scholars have long neglected the person for whom the volume is named. Landscape painter and Brooklynite Jesse Talbot was one of Whitman’s closest companions in the years he was conceptualizing what would become Leaves of Grass. Whitman wrote about and promoted Talbot’s paintings in at least four newspaper and journal articles in the 1850s, and he also owned one: Christian at the Cross, a scene from The Pilgrim’s Progress, a version of which I recently rediscovered in a private American collection.

My paper will outline, for the first time, how Talbot began his career as a leader in New York religious organizations and then, in mid-life, became an acclaimed painter of overtly and implicitly allegorical American landscapes, catching the attention of the young Whitman. As a journalist, Whitman himself was a kind of evangelist for a specific vision of American arts and culture, journeying toward a the democratic vista first fully articulated in Leaves of Grass. My paper argues that the personal and professional relationship between Talbot and Whitman was crucial for this transition and that the theme of pilgrimage, as explored by Talbot, resonates in Whitman’s writings—that, in fact, both artists, in different media, used related imagery and punning motifs in the defining works that came out of their New York years. My paper draws on new primary evidence about Talbot and Whitman’s promotion of him to demonstrate how Whitman’s critical response to Talbot’s work shaped both men’s careers—for better and for worse.